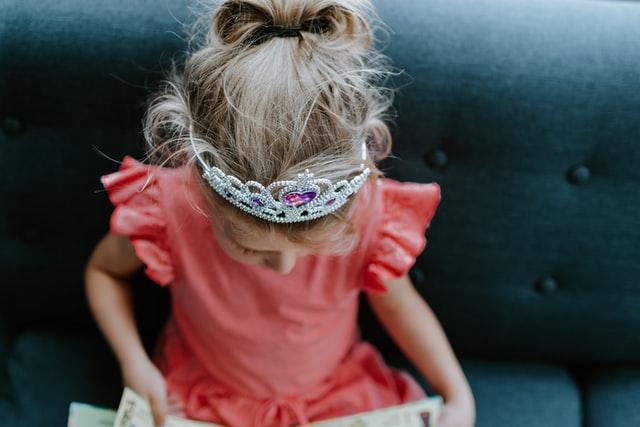 On a recent visit to her grandparents, my four-year-old daughter Violet decided to wear her favourite skirt. It’s also the most stained, torn and tattered skirt she owns. But I let her.

Same goes for when she opts to wear to kinder a bedazzled long black number with a pink frilly fishtail at the bottom. It wouldn’t be out of place on Toddlers and Tiara’s, but I bite my tongue.

Would I prefer she selects clothes from her wardrobe instead of her dress-up box? Yes.

Do I get embarrassed at her often hideous and inappropriate clothing combinations? Regularly.

Would I change anything? Not a chance.

Some friends who have regular conflicts with their daughters over clothes say they have a responsibility to intervene in order to teach their children what’s appropriate to wear in different situations. Dressing ‘nicely’ is a sign of respect, particularly when children are in the presence of grandparents or attending formal gatherings.

While I can see their point — and yes, Violet’s outfit to visit her grandparents certainly raised some eyebrows — there is a bigger issue at stake.

The larger lesson is that children, particularly girls, should be allowed to be in charge of their appearance.

Every time I tell Violet that her clothing choice is wrong, I’m diluting the importance of her decisions. I am telling her that my opinion about how she looks is more valid than her own.

If we didn’t live in a world that objectifies women and continually tells them their appearance isn’t good enough, this wouldn’t be a big issue.

But women are bombarded with messages about how they should and shouldn’t look daily, and, worse still, how an acceptable appearance is central to being an acceptable girl or woman.

This prescription of how to look not only changes constantly, it almost always comes from an external source.

And surrendering decisions about their appearance to external sources is another way women are not in control of their bodies.

If my husband and I train Violet to look to us, instead of herself, for control and approval of her appearance then the fashion and beauty industries, the media, peers, and boyfriends will soon replace our voices when she’s older.

I also don’t want to inflate the importance of appearance in my daughter’s life and her developing identity by turning it into a source of conflict. Mostly, I just let her get dressed in whatever she wants and, presuming she’s safe, don’t say anything at all about it.

If Violet doesn’t know how I feel about her clothing choices, I figure I’m not burdening her with the pressure of making me proud or not making me embarrassed based on her appearance. She’s her own person and not an extension of my identity.

My only rules for Violet’s dressing is that she has to wear shoes that do not limit her movement and ability to play, and that her outfit is climate-appropriate — a hat in the sun and a coat in the rain.

As every parent knows, clothes are a popular gift and they are not always what you would choose yourself. So there have also been times when I’ve had to draw the line at clothes with inappropriate statements such as ‘I’m prettier than you.’

Every other decision, I hope, is a daily lesson to Violet that she is in charge of her body and that she is not required to manipulate her appearance to please others.

Instead of having conflicts about clothes, we focus our parenting efforts on how Violet behaves rather than how she looks. Showing respect to other people, grandparents included, should be about how she conducts herself rather than how pleasing she is for them to gaze upon.

Clothing is one area in which small children can exercise their agency and express themselves. Provided that their options aren’t hazardous to themselves or others, giving them freedom to choose their own outfits is a way for them to get daily practice making their own decisions.

Even though the odds are stacked against me, I live in hope Violet will carry these values into adulthood.