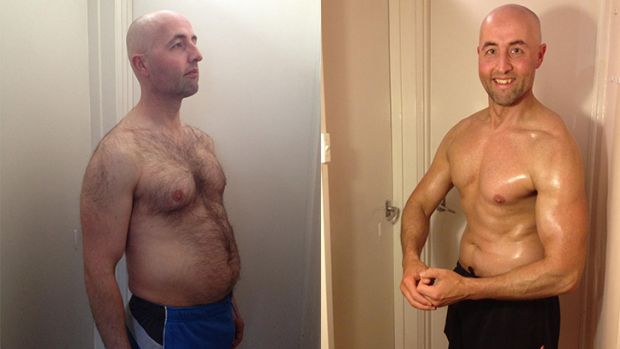 It’s no secret that the weight loss and beauty industries are addicted to using Photoshopped fakery to sell their products.

Exposés such as the Body Evolution video, which recently went viral, show how easily Jane Average can be turned into Jane Amazon with nothing more than some expert mouse clicks.

Perhaps this is why before and after images — particular the grainy, homemade ones, featuring real people —seem to offer authentic stories of transformation. The transformations are often so dramatic that even the most skeptical among us can be fooled into believing that the results were achieved by a 12 week exercise and diet program.

No pain, no, er, gain.
But the PsychGuides’ Weight Loss Fakers project reveals that seemingly real before and after shots can be as easily manufactured as the Photoshopped images.The project, which catalogues a series of before and after pictures, shows how you can engineer your very own body transformation without the hassles of the AbFlex King or sipping on a goji-berry diet smoothie created with your Nutri-Ninja Blender.

A radical body transformation that you’d think would take buckets of sweat and weeks of deprivation can be achieved with very little effort and in a matter of hours. It’s as simple as a bit of a wax, a fake tan and some photographic coaching.

Following the tips on the Weight Loss Fakers website, the first step was to take a before shot of Chris which made it look as though the last time he saw the inside of a gym or a vegetable was during the Clinton Administration.

He drank lots of water and flavoured milk and ate salty-food to encourage water retention so as to look as large and bloated as possible. The ‘before’ photo was then taken in dim light with Chris slouching in baggy, ill-fitting shorts, sticking out his gut and looking sad.

Once we had the ‘before’ shot in the can, we created the ‘after’ shot. Chris’s first task was a trip to a beauty salon for a chest, back and shoulder wax, and then a spray tan the next day.

Prior to having his photo taken, he spent about five minutes doing push-ups, bicep curls and crunches, followed by me smothering him in oil. I then photographed him in bright lights to create shadows and definition. He wore dark-coloured shorts, sucked in his gut and donned a triumphant smile.

Voila! In less than twenty-four hours Chris went from Gut Man to Cut Man. If I hadn’t witnessed it, I probably wouldn’t have believed it.

In reality, Chris looks like neither of these images. His true physique is somewhere between the two extremes. But if a couple of amateurs with an iPhone can produce such deception, imagine what experts can do.

Sam Deford, who is part of the creative team behind PsychGuides, says he wanted to show people that banning or declaring the use of Photoshop isn’t a solution to the trickery of the weight loss and beauty industries.

‘[O]ur project shows the futility of such disclaimers. Will we now need disclaimers on images if someone dehydrates, and doesn’t eat for 12 hours before the shot? Where does it stop?’

There’s no easy solution to the tyranny of beauty that is so ingrained in our culture. And we’d do well to stop looking for one. Government or industry regulation about the use of Photoshop is not going to achieve much, because as the Weight Loss Faker project shows, one method of deception is swiftly followed by another.

Real victory will only come from letting go of the destructive idea that physical transformation — however it is achieved — is the source of moral redemption and self-worth.

A good place to start might be to maintain our skepticism when the ads for New Year’s Resolution 12-week challenges and weight loss potions flood our TV screens and Facebook feeds in the coming weeks. We need to recognise the people who peddle unrealistic standards of beauty and weight loss for the shysters they are.