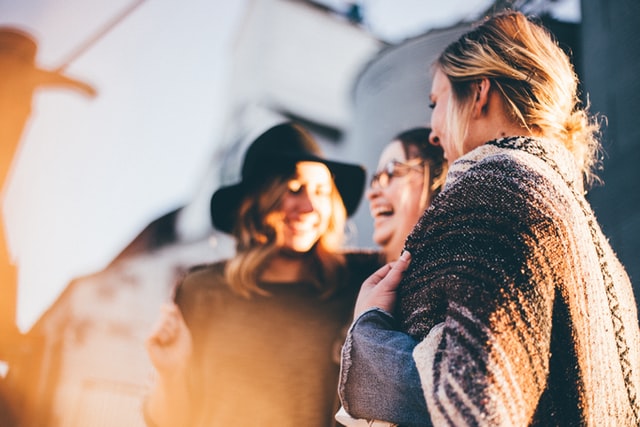 ‘Oh wow, you look amazing. You’ve lost weight,’ said one of the mums at kinder pickup.

It was an unexpected compliment because after years of body hatred I now put my efforts into self-acceptance and sustaining healthy eating and exercise habits rather than battling to make myself less than I am.

But even though weight loss wasn’t my goal, it did feel like a compliment. In our culture, it is one of — if not the — highest forms of praise. We’ve been conditioned to believe that weight loss is synonymous with success, control over one’s life, improved health and of course, enhanced beauty.

Being thin is as much a moral judgment as it is about health. Even media ‘concerns’ with women who are painfully thin come wrapped with a certain degree of admiration.

For example, when former Home and Away star Sharni Vinson was recently snapped on a beach in Miami having lost a stack, the article included a quote that explained away her weight loss as the result of hard work.

‘I always lose weight when I’m shooting a movie — you’re constantly busy and on-set giving 110 percent’ Vinson is reported to have said.

So that’s all right then. Other than a healthy dose of the Protestant Work Ethic, there’s nothing to see here.

Weight loss praise, just like fat chat, is a socially acceptable strategy for women to bond with each other. I’m just as guilty as the next woman of trying to make my friends feel good by celebrating their weight loss.

But let’s face it, a compliment about weight loss comes with a sting in the tail. No matter how well meaning, underneath the praise is the implication that when you were fatter, you looked ever so slightly crap.

Given that most people who lose weight will eventually regain it, the compliment has a definite use-by date. It’s only a matter of time until the compliment is null and void. So rather than making our friend feel good, we’ve effectively put her on notice that any future weight gain will not go undetected.

Perhaps what’s most grating about statements relating to changes in body size or shape — whether positive or negative — is that they show that we’re all slyly monitoring each other, checking each other out to see if we’ve porked up or pared down.

Just as we objectify each other’s bodies, we in turn learn to objectify ourselves, basing our self-worth on how others perceive us.

Back at kinder, on this particular day, it occurred to me that my four-year-old daughter Violet was listening to the weight loss compliment, and the temporary warm glow of affirmation was quickly replaced by a sickly feeling.

I fear that what my daughter learned from this exchange was that if you lose weight you necessarily are deserving of positive attention. The exchange had nothing to do with the messages of health and positive body image. Rather, it was reinforcement of our society’s sickening quest for thinness at all costs, and its vile insistence on judging people’s — particularly women’s — worth by their appearance.

We can’t raise our kids to feel happy and confident in their own bodies if they hear their mothers judging one another by the sizing number on the back of their jeans. We need to stop using weight loss as a benchmark for how good we are or how well we are doing in life.

Focusing on the size fluctuations of our bodies, however great or small, only serves to make us all more insecure about our appearance. One of the greatest gifts we can give to ourselves and our friends is a safe space that is free from the hateful and anxiety-inducing weight and beauty messages that plague us.

If we really care about each other — and our kids — it’s time we found a different way of expressing our admiration and friendship.