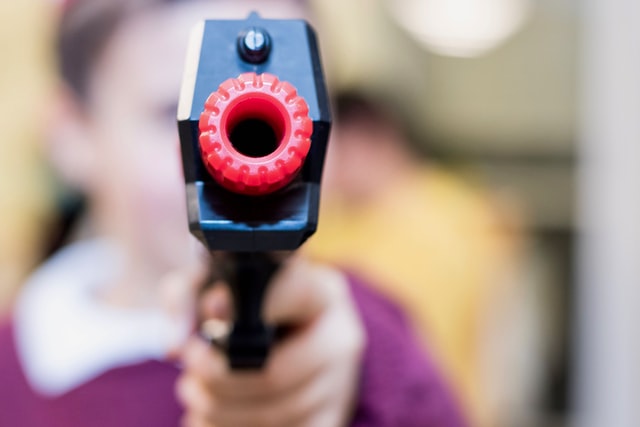 When my friend’s son nibbled his toast into the shape of a gun and started shooting the cat with it she thought it might be time for a rethink on her rule about guns.

Like many parents, my friend hated guns, even the toy variety, so her six-year-old son had never owned a toy weapon. At the same time, he was obsessed with them. He asked all his friends to buy him guns for his birthday and he even put in a request to Santa for a rifle.

She wondered if prohibiting weapon play was actually contributing to her son’s heightened interest in guns, yet she felt conflicted about the prospect of endorsing or encouraging violence.

It can be disturbing to watch young children run around with weapons pretending to maim and kill each other or, as the kids say, “getting dead”. You wonder, are we encouraging aggression in kids by allowing them to play with guns?

After noticing an increase in weapon play, a Melbourne childcare centre recently decided to tackle the issue head on and initiate community consultation on the subject, including conversations with children, parents and research into how other childcare centres were managing the issue.

“Weapon play was really evident in both the kinder and preschool room, and the younger children were being drawn in, thinking it was okay to pick up a block of wood and shoot a person,” says Director of South Melbourne Neighbourhood House Kate Hall.

“It concerned the staff, and some parents were saying that their child wasn’t allowed weapons at home so their interest in guns must be coming from the centre.”

The first response Hall received from parents about the consultation was relief.

“The feedback from the families was overwhelmingly positive that we were actually raising this and talking about it, because so often they don’t know what to do themselves.”

Hall and her staff were reluctant to institute a blanket “no guns” policy, fearing that this would only make weapon play more enticing or encourage children to hide their play from adults.

“We understand that some children need to experiment with certain things, and this was just another experimental stage for certain children.”

A 2018 article in the journal Criminal Behaviour and Mental Health backs this up. Researchers Sven Smith, Christopher J. Ferguson and Kevin M. Beaver looked at the links between children’s play with toy weapons and juvenile criminality from the age of 5 and then followed-up at 15. They found little connection between playing with toy guns and later criminality.

“Parents and educators often misinterpret or are uncomfortable with play fighting, due to its resemblance to serious aggression, and have difficulty recognising subtle differences between the two,” write the researchers. “The act of pretending to be aggressive is not equivalent to being aggressive, nor is it a strong indicator of future aggression.”

Further, they point to evidence suggesting that this kind of play is a normal part of development, and stopping it may do more harm than good.

The educators at South Melbourne Neighbourhood House agree that weapon play is not all bad. It’s often part of superhero play, which can give children the opportunity of roleplaying being heroes – helping people, being brave, being good, and saving the day.

Some childcare centres have dealt with the weapon play issue by having gun licences which are given to children who can demonstrate they understand the rules and limits of using weapons.

The licences are only valid for one day so the following day, if the child wants to engage in weapon play, they have to reapply for the licence.

South Melbourne Neighbourhood House decided against the licence system and instead decided to develop a set of guidelines for weapon play.

“We allow weapon play in certain safe environments, so that it doesn’t impact on the children that don’t want to have anything to do with it,” says Hall.

“There is no pointing guns at people and no using bad language. And there’s no baddies allowed at Neighbourhood House, only goodies. They can play superhero weapon play, but they’re looking after each other.”

Since the guidelines have been implemented Hall has noticed a change in the way the children play with weapons.

The other big difference Hall has noticed is that there is a whole lot less weapon play going on.

In the case of Neighbourhood House at least, the best way to reduce weapon play is to allow it and demystify it.

And my friend’s son who created a “gun” from his toast? She relented and gave him a toy gun to play with. Like most kids’ toys, he grew tired of it and moved on to other activities.